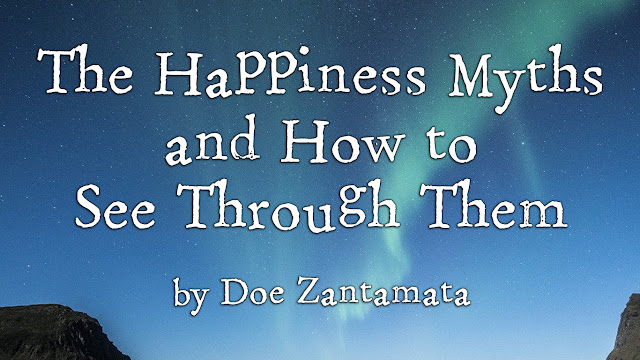 Each generation of men and women and each different culture tells their children a myth of happiness. For one generation, it may be to tell girls to be quiet and pretty and find a wealthy man and then they will find happiness. For the boys in that society, it would be to out compete the other boys in acquiring wealth and then they would have their pick of the pretty women and that would be their happiness. So all the girls try to be pretty and all the boys try to get rich quick and two generations later there are a million make up tutorial videos on Facebook for the girls, and Clickbait Drop Ship Funnels e-Courses for the boys, and nobody is much prettier, richer, or even connected and they keep doing these things every day without even knowing why.

The myth of happiness for Western society in the 1970s and 1980s was grow up, get a college degree, get a high paying job, marry someone similar, buy a beautiful house and make it more beautiful with Pier One decor, have two children (any more and you're strange, and less and you're strange), and then you will be happy. A lot of people followed this path and ended up overspent, overtired, and divorced in their 40s.

That doesn't have to be an awful thing, but for a lot of those same people, it sure feels that way. There is sadness, anger, regrets, and feelings of failure. Rather than realizing that the myth wasn't true, they blame themselves or their former partners. Meanwhile, the second half of their adult life ticks by.

Instead, people in this position could realize that they bought a bridge that collapsed, and seek out some new real estate. And this time, keep a check of how feels inside. Don't just look around and ask other people what's making other people happy. For one thing, we're only ever seeing the outside of anyone else's life. From the outside, it may look like they've got the best life, but from the inside, it may be the best life for them or it may be the appearance of the best life but not that at all. The relevance to your life is for an idea to try at best, but beyond that, it's got nothing to do with what's going to make and keep you happy.

Everyone has a little lock inside, complete with a key. Inner thoughts and outer circumstances can close that lock and block happiness, but it can't be opened from the outside, only closed. It must be opened from the inside, and then the person kept in surroundings and relationships that allow it to remain open.

For some, it's a career that involves work for 18 hours a day and they call it passion. For others, working that much would feel like a prison and their passion is in family and relationships. For others still, being constantly surrounded by people feels suffocating and they need their solace. Some love the city and the bustling energy and development. Others love the peace and quiet of nature and feeling part of it.

Have you started to pursue your actual happiness? Leading by feeling, not by what other people say, have said, or do? If not, it will be a daily adventure and a lot of fun. You do have to pay attention to your intuition and learn the language of your inner voice. Other than that, if you follow it, your path will unfold and your surroundings will develop as a match to that which is going on inside of you. You'll wonder why anyone ever created a myth of happiness for any generation because it will become so obvious that a society attempting to adhere to a specific program was doomed from the start.

As you live on from the inside out, the world will never look the same to you.

You will feel happy.

You will feel free.

Learn the language of your own Intuition with the help of Doe's book:

All of my articles are 100% free and always will be. If you'd like to help support my work, I have signed up with "Buy me a coffee." I appreciate your contribution! Love, Doe