I used to loathe the word "forgiveness."

What it meant to me was that someone could hurt me, lie to me, or even abuse me, say "sorry," and that I was supposed to pretend like nothing happened. If I didn't, they would say to me, "I thought you were a forgiving person," or, "what I already said I was sorry."

It felt awful, outside and inside.

It felt like forgiving was designed to punish the person who was hurt.

I had heard "forgiveness sets you free," and " forgiveness is for you, not them" and neither of these things made any sense because I certainly did not feel free and there appeared to be nothing in it for me to keep allowing their nonsense.

Well it didn't make sense because what I believed "forgiveness" was, wasn't what it was at all.

One day, I looked it up in the dictionary.

"to let go of anger and resentment towards a person or event from the past."

What it does say isn't as important at what it doesn't say.

Forgiveness is that, just that. Ceasing to carry around resentment or anger inside of yourself for what happened in the past.

It doesn't say you're supposed to pretend it never happened.

It doesn't say you're supposed to trust the person again when they broke your trust just because you have forgiven them.

It doesn't even say you have to speak to them again.

Forgiveness IS for you.

Forgiveness DOES set you free.

Forgiveness is only to stop carrying around the pain of the past inside of you. So that you don't bring it into every new place you go, allowing it to bubble up and explode on people who had nothing to do with causing you injury.

If you decide to forgive a person but not speak to them again because you know you can't trust them, that's 100% wise to do and doesn't mean you're unforgiving. It means your trust was broken and they gave you no reason to think it would not be broken again so you decided to separate. Or maybe they made promises and broke them again and again until your trust for them was entirely demolished.

Forgiveness means you accept what happened has happened and can't be changed. It means if a memory pops up or gets triggered from the past, you're not fired up by that anger and resentment and completely disempowered in that moment as if you were still living in the past.

It isn't instant, nor easy, and there is a process to it. It takes time. Memories can catch you off guard, but once you are aware of what is happening, you can use the process on them and dissolve them as they come.

Knowing what forgiveness is, real actual forgiveness, and applying it to my life has been absolutely life changing.

I no longer poison present days with past pain. I can hear a song that reminds me of a painful time in the past and not get set off at all. I didn't forget what happened, but it no longer has power over me.

This is the gift of forgiveness. It's not for them, about them, or dependent on them. It is for you, about you, takes place within you, and gives you your life back. It gives you and all those who you choose to have in your life now the best version of you, unencumbered by haunting memories that no longer haunt.

You don't forget, you don't erase, you heal.

I wrote everything I know in my third book, "Happiness in Your Life -  Book Three: Forgiveness." This book will give you the tools and insight to know how to set the past down and move on. I hope you read it and that you get out of it exactly what I put in it for you. Freedom.

Get the book, "Happiness in Your Life - Book Three: Forgiveness" by Doe Zantamata in kindle ebook, hardcover, and paperback on Amazon: https://amzn.to/2YlQ4bU 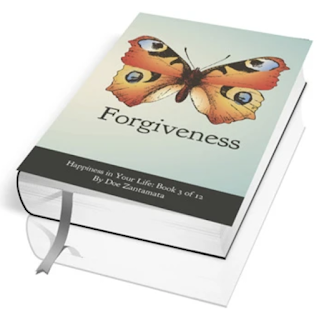