The word "narcissist" gets thrown around a lot lately. Apparently only 0.5% to 1% of people actually have Narcissistic Personality Disorder, but if you talk to some people, it seems they've diagnosed every single one of their exes and their friends exes with NPD.

We all grow older, but not all of us mature. Physically, as long as we eat nutritious foods, our bodies make use of the components and turn us from little children into grown adults.

Mentally and emotionally, we may learn from our parents and other influences in our lives, but if either of our parents were also emotionally immature, they may just have passed down the wrong lessons to thrive in adulthood and relationships. Emotional maturity takes introspection, emotional responsibility and processing, and the ability to reflect, learn, and grow as a person. It's a daily choice and takes thought and effort. Not everyone even realizes that this process needs to happen if they want to enter into healthy, adult relationships.

When you meet someone who is emotionally immature in romantic relationships or even friendships, they present themselves to you as the Endearing Five Year Old. They are, sweet, lovable, shy, and agreeable, and seem to pose zero threat whatsoever. You feel very safe and even in charge around them. You may feel protective of them after a short while and find yourself looking out for them in ways that you would for a small child. They give you sweet, thoughtful gifts, often reflecting things you've said you liked, or handmade, home cooked, or otherwise incredibly considerate trinkets and treasures. Not just one or two, but excessively.

This is immediate and so endearing that it can make you feel like you've met someone really special.

Phase Two comes as a shock. The Endearing Five Year Old thing was an act. Maybe not even an intentional act, that's just how they've learned to present themselves to someone else to get them to like them. But for that time period, usually somewhere between a month and three months (but can be longer), they've been stifling their own feelings and just focusing on you; what you want or what they think you want.

Phase two is when they begin to resent having to act and stifle themselves, although you didn't ask them to and had no idea this is what was even going on.

Now you get to meet their other half, The Unruly Teenager.

The Unruly Teenager will disagree with just about anything you say. Even if they've agreed to it before as the Endearing Five Year Old. Teenagers seek to individuate from their parents, and they often do that by disagreeing, arguing back, or starting arguments if you're not willing to do it.

These arguments can be over absolutely nothing. If you don't give them any material, they may out of the blue criticize the way you do something ordinary and perfectly fine, some imagined look you gave them or something you said that they're twisting into meaning something derogatory, or they may say something super mean and later tell you they were joking.

They say things like, "You always have to have it YOUR way" and "You ALWAYS think you're right!" and "We always do what YOU want!" and other things that remarkably sound like things kids say to their parents when they are mad at them.

Phase One put you on a pedestal, and phase two swats you right off.

This is so shocking and off-putting. You were being yourself and really thought you had an amazing connection with someone and now they're like Jekyll turned Hyde and you have no clue what's happened.

Well what happens next is that they turn back into the Endearing Five Year old, complete with apologies and excuses. Like that they've been hurt in relationships before, they're scared of trusting, they're not used to being in a relationship, they've never cared about someone as much as they care about you...all sorts of other things that are designed to trigger your sense of protection towards them again.

They try to talk you out of what you felt and what you saw of how they acted and how it hurt you. They say that this is part of the "getting to know each other" process and that they just let things go and that you should just let things go and don't dwell on them as if you're the problem by trying to address their behavior instead of their behavior being the problem. They are essentially refusing to take responsibility for their words and actions, and if you agree to it once, it will happen again and again as now you've accepted to absorb the consequences of their choices.

Just as you'd forgive a five year old for having a tantrum because they were tired and cranky, you forgive them. And forgiveness itself is great, but the mistake is to trust that this was a one time thing and that you'll get back that sweet passive person you first met. You won't. It was never them. That person will show up between arguments and then the Unruly Teenager will seamlessly take their place.

Emotional Immaturity means acting in very hurtful ways without consideration for anyone else.

-->> If they become jealous, not even by anything you did, they will do something to try to make you jealous. In their childish mind, you hurt them, so they are going to get revenge and hurt you to show you what it feels like.

These are just a couple of examples, but if you've lived this, you know exactly what it looks like.

Instead of having a partner on your side, you feel as though half the time you have an opponent who you're not trying to beat or win against at all, but can't seem to keep the peace with.

Maybe they even told you that everyone else in their past has been controlling or deceptive and you're the best, only good person they've ever met. What that does is make you feel special and important, but what it really means is that this is their pattern and you'll eventually be another one in their blame pile.

You can't grow someone else up. It's not your job and if you try and "help" them to grow up, they may be so grateful for awhile (as the five year old) and then turn on you and tell you that you're controlling (as the unruly teenager).

If you want a real relationship, it has to be peer-to-peer from the start.

You can't take on the role of the parent and expect that this will become something it never was.

If what attracted you to them was that they were in need of rescue and they were so kind and appreciative, though your intentions were pure and good, that is a big sign that this was off from the start, and you unknowingly did become their mom or dad in those early days.

Helping people is wonderful, but your closest relationships are going to affect you too much to be anything other than peer-to-peer, mature, supportive, and real. If you take one of these on by accident, it's going to spill over and negatively affect all of your other close relationships and you will lose yourself trying to fix someone else.

Detach from this type of relationship or watch that you don't fall into one in the first place.

If you have been betrayed or really hurt in the past, the Endearing Five Year Old routine may have been exactly what drew you in to them in the first place, because you felt safe around them and thought that they would never hurt you.

It's hard to recognize, but helps to listen to them and how they talk about their past, friends, family, and how they treat people in daily life. If there is a big difference between how they treat everyone and talk about them when they're not around, don't ignore your own eyes and ears and think that you'll be treated any different down the road. They are showing you what they believe about people and you are a person.

You don't have to hate on or judge anyone who is like this. You wouldn't hate on a five year old or a teenager for acting like a five year old or a teenager. But you wouldn't date them or think you could have a relationship with them either. And you wouldn't try to fast forward grow them up just so they'd be a good match for you. Know that some people can be 30, 40, 50 or more on the outside but they're little kids emotionally. Chances are, they don't realize it and it causes them a lot of pain in their lives. But it's going to be up to them to realize it and do their own work to mature out of it to become a solid person in the lives of others.

It may even be that it's exciting to them to think that they are competing and winning against people in their lives and they do not want to change. Peace may be boring to them. Whatever the case, let them be who they feel they need to be to get by in this world.

Take care of your own heart and guide your own life, filling it with people who you can accept, appreciate, and feel comfortable around today as they are -- as they have chosen to and worked to become.

Your life will be so much better for it, and so will the lives of everyone else you hold dear.


Learn more about how to become immune to harmful patterns in Doe's book, "Happiness in Your Life- Book Four: Trust" available on Amazon in ebook or Paperback:

Change and Growth in Relationships 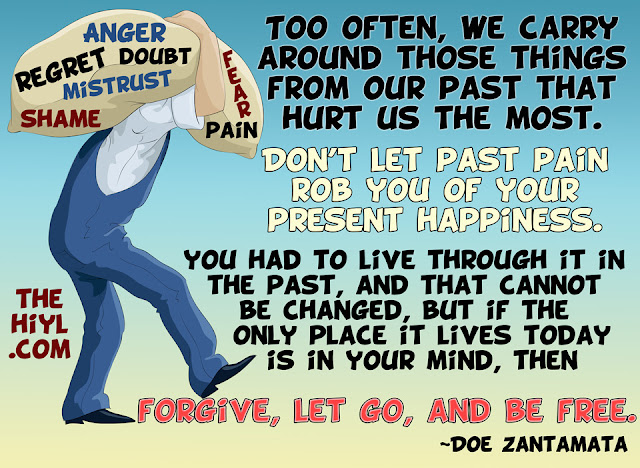 Too large a load -- How to let go of pain