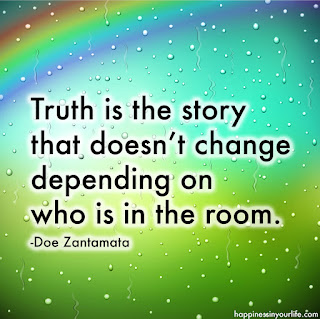 Truth is the story that doesn’t change depending on who is in the room.
-Doe Zantamata

People often distinguish "the" truth from "your" truth, and that is valid…truth is often perception and differs from person to person. But if you don't even know what your truth is, you are essentially lost. Lost in trying to become who other people think they want, changing like a chameleon depending on who is in the room or not.

What is the point of anything but your truth? A lot of people are afraid of it. They think it's a bad thing. It gets folks in trouble, hurts people's feelings, causes rejection and isolation. But truth doesn't actually do any of those things-- it's the lack of truth that does. Plus, lack of truth wastes an awful lot of time and none of us have any to waste.

Stop being afraid of your truth. Your thoughts, your feelings, your life.

It may be very rocky in the beginning and you may feel that no one wants to hear it. And it's true a lot of people will oppose, especially those who you've been agreeing with on the outside but silently disagreeing with on the inside for years. But after that clears away, what you'll discover is freedom. The freedom not only to be yourself but also to discover a deeper, more confident, more accountable version of yourself than you've ever known.

There will be no more half-truths, anxiously hoping someone doesn't ask, find out, or figure out what you didn't think you wanted them to know. There will be no more drama caused by you. Every action has a consequence and the consequence of trying to sidestep the truth is that it comes back later with a vengeance. The consequence of truth may seem turbulent in the beginning but it leads to absolute peace of mind and connections and relationships that are real and based on trust. Priceless.

Learn to love the truth. It's not the enemy at all. It's the best friend you'll ever have.


You don't have to be a detective to learn the truth...one huge help is learning to understand and use your intuition :