It's something, but it's not jealousy. 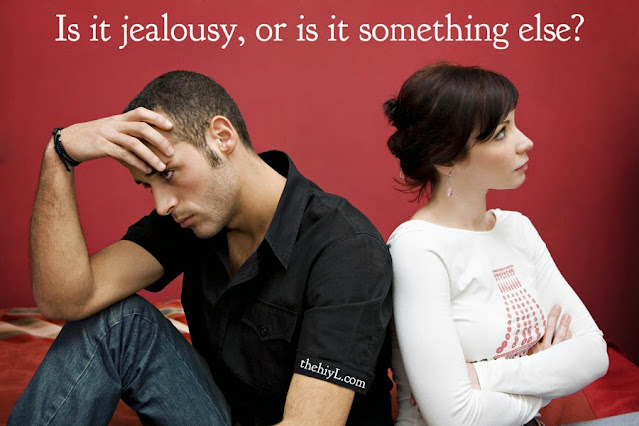 Is it jealousy, or is it something else?
By Doe Zantamata
Some people mistakenly say, “Oh, you’re just jealous” when jealousy really has nothing to do with it.
In truth, the other person is hurt and can’t believe how unappreciated they are.
A lot of relationships would be a lot happier if people took the time to notice, appreciate, and point out the great qualities of their partners more than they do of other people; friends, aquaintances, or even total strangers.
Have you ever been out somewhere, or even at a friend's place, and your partner made a nice comment about someone else? Like, "Oh she's so nice," or "He's so very thoughtful." Even though someone saying nice things should be always great to hear, does this ever cause a little uneasy or even painful feeling inside you? Do you feel the need to say, "Well I do that for you all the time." or something similar?
You may then be accused of "being jealous," but it's not jealousy at all.
What you're actually feeling, is not appreciated. Maybe inside you justified your partner not saying "thank you" to you enough because maybe they just don't notice those things, or maybe they just don't say thank you all that much. You accepted their unappreciative seeming behavior because you accepted that's just how they are.
But once they compliment someone else, that all changes.
Now it becomes, "Why are they noticing this tiny little thing from someone else, but they don't seem to notice the mountain of similar nice things that I do for them all the time?"
First, it's good of you to speak up. Just make sure you don't let that little monster known as anger make its way into your words. Anger out tends to have anger directed back, and that's most likely when you'd be dismissed as "being jealous" or some other nonsense.
If they think you're just jealous, just know that for whatever reason, they, right now, don't get it.
You can make them more aware in a more tactful way. Chances are, they really do appreciate you, but they have come to expect that you always do nice things and "don't need" any thank yous or compliments.
Well, nobody "needs" thank yous or compliments, but they are free to give and hardly take but a few seconds, so why not give them daily?
Sometimes people take their partners for granted. Especially when their partner always does incredibly nice, sweet, considerate things. They've set the bar so high and should be appreciated a lot, but unfortunately often times, the only time they hear about what they do, is when they stop doing it.
To have better relationships, we have to get out of the "if it ain't broke, don't fix it" mentality. If you have a car, or a roof, or a tv set, you really don't think about fixing it until it's broken...then you fix it right away. You could tell a tv set you love it all day long, it's still going to break whenever it's going to break.
But people aren't cars, or roofs, or tv sets. People are people. We have emotions. We thrive on appreciation, love, and expressing those things on a daily basis is like food for the soul.
One of the biggest reasons people say they are unhappy in their relationship is because they don't feel appreciated. This usually comes as a shock to the other person, because they really do appreciate them, they just haven't bothered mentioning it in a few years.
So...bother! Notice all the nice, kind, sweet things your partner does for you, for your home, for your family. Thank them, compliment them, and mean it! You will likely see a return on your newfound appreciation almost immediately. This may seem like nothing, and it may seem so insignificant just because it's so easy and almost effortless to do. But it makes such a huge difference to the quality of relationships. In addition, it helps to boost a person's self-esteem. Knowing daily that they make a difference and improve the lives of those who they love is such a gift.
If this is done consistently, then it will strengthen every relationship.
Then, if your partner were to say, "That person's so nice" you could 100% agree, without any ill feelings inside, because you've already heard how nice you are 3 times today and 100 times this week. You'll just know that your partner is a grateful person who always notices good things and nice people.
By Doe Zantamata
Learn more about relationship patterns and how to change them in Doe's book, "Karma:"