How to Set Boundaries when Being Judged by Other People 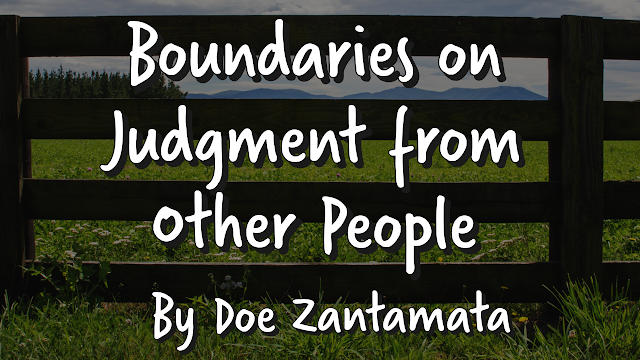 "Judge me when you're perfect" is the "raw" feeling you may have when you've been judged unfairly. Communicating it this way, though, will probably come off combative instead of beneficial to anyone.
If you've been judged unfairly by someone who doesn't know you and isn't a part of your life, it's probably best to just let them think what they want and move on.
If it's a person you work with or live with...it's time for a boundary.
You don't want to get caught up in a cycle of negative focus on you and then you feeling you need to explain yourself or justify every little thing you say or do. A boundary may be saying something like, "That's not true." or "I don't appreciate that." ...a way to make it clear that it isn't ok with you and that's not the kind of treatment you're going to put up with.
Remember, too, that when people assign motives to your actions that were not your actual motives, those are coming from within their own minds. People with trust issues will project those issues onto everyone. People who are used to fighting will pick fights in a heartbeat. People who are insecure will seek out flaws in others and jump all over them.
Don't get sucked in. It's never worth it.
-Doe Zantamata
Value yourself and boundaries will become a lot easier! Learn how with the help of Doe's Book, "Happiness in Your Life - Book Five: Appreciation."
Email Post
Labels: Boundaries