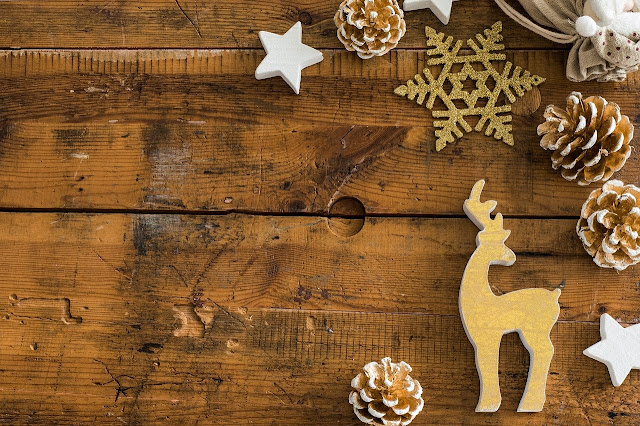 Those two words seem to invoke a feeling of sadness, don't they?

The first Christmas I spent alone was in 1997. I was living in Tallahassee, Florida and was a student at FSU. I had a 6 month old puppy and three cats. I lived in a crummy, little $290/month apartment that had a small heating unit in the middle of it that ticked constantly when you turned it on, sending cockroaches scurrying out of it, and really didn't heat very well anyway.

Everyone who lived on my street were college students, and all the lights were off, all the parking lots empty as soon as school let out for the semester when they all went home.

I was super unhappy. I had a long distance boyfriend who visited me until the 23rd and I was not good company. I was really caught up in my own victimhood and wasn't able to appreciate anything. Not his presents, not his presence.

After he left, I had an idea. I'm not sure where it came from.

I was feeling super down because in my head were visions of Norman Rockwell paintings with families all together, celebrating the holiday and enjoying each other's company.

Downtown Tallahassee was basically one street and on that street was a homeless shelter. The men would line up each evening before dark and for a few dollars they could get a meal and a cot for the night.

I had an idea to stop in at Goodwill on the 24th and buy some sweaters. I bought two bags worth, I think a total of around $40 on my credit card.

On the morning of the 25th, I woke up and really felt a sadness. It was one that I just wasn't going to be able to shake. Before dark, I drove over to the homeless shelter with the two bags of sweaters and saw the men lined up to get in. I rolled down my car window and called out, "Excuse me, would you like a sweater?" They looked over and I'm not sure if they heard me or not so I took one out of the bag and held it out the window. I said again, "Would you like a sweater?" to the line. A few men walked over slightly hesitantly. The first one, I asked him his size, and he said he didn't care. He reached out both hands and I gave him the sweater. He smiled...like a really big smile. I handed out both bags of sweaters to them all, and they were acting as though I was handing them gold bars. They were putting them on right away and the expressions on their faces were just magical. It was 23 years ago and I still remember it clearly. They all said thank you so much and Merry Christmas and in those minutes I REALLY felt what I still think is one of the most true forms of the Christmas Spirit. We were all there in appreciation and giving, and in abundance and joy, even though it was cold out and we were in a parking lot and it was only a dozen or so Goodwill sweaters.

And when I went back home to my little crummy apartment on a dark and lonely street and opened the door to my puppy and cats, I didn't feel the same way I had felt for the whole week before. I didn't feel any sadness at all. I felt super grateful to have my little home and my own bed and the love of my little pet family.

If you are spending Christmas alone, it can be sad. I get it. Believe me, I get it. But we do have now technology and the ability to connect with people all over the world. Right here, right now. Make something really good out of this day. Whether you spend the day reading a good book or snuggled up with a cup of tea, or if you zoom with some family or friends, make it a good day even if it's not the day that you see in the Norman Rockwell paintings. You're going to remember this day next year, the year after, and probably the year after that. Maybe even 23 years from now! So make it the best Christmas that you can, so that you can remember it with a happy feeling for years to come. Or if not a happy feeling, at least not as sad as it would be if you hadn't chosen to make the best of it right now.