Trying to Accommodate the Problem Instead of Fixing It 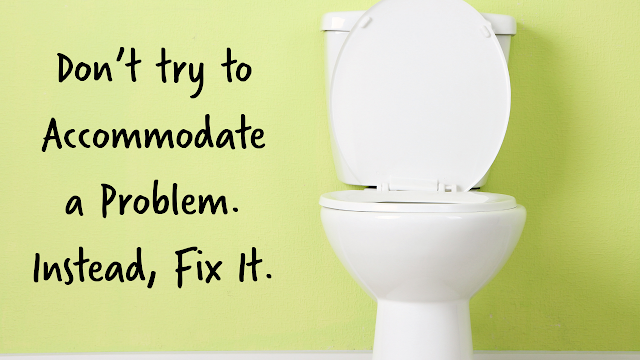 After flushing my toilet, there came a whining sound, then a loud jackhammer noise from the pipes in the wall. I immediately reacted and turned off the water at the wall to the toilet. Now, this isn't the first time this has happened. It happened around a year ago and my immediate worry was that some huge terrible plumbing problem was going to result in enormous cost and walls needing to be torn apart and how nice things seemed just a few minutes before.

What ended up being the problem was a $11 part in the toilet called a fill valve, easily replaceable. This is what it looks like if you ever have the same problem:

It's called "resonance" which sure is a nice sounding word for "jackhammer in the walls."

So I learned and moved on with my life.

Fast forward a year later to this week when it happened again. That fill valve was supposed to last for 7 years, and I didn't want to call a plumber on the weekend, so I watched every single video on YouTube and tried a few things. 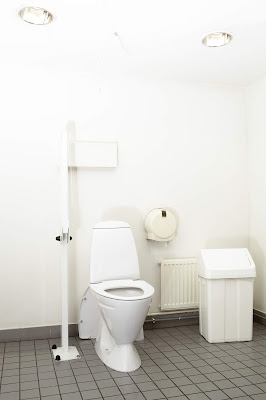 The first thing I did was an epiphany of sorts in the grander scheme of things.

I read that sometimes when the water pressure is too high, the first thing to go is the fill valves in the toilet. So I thought I'll try to lower the water pressure and see if that helps. Sure enough, lowering the pressure allowed the toilet to work, although it did fill slower. Only one problem. Now everything else in the house didn't work. The shower was a dribble, the washing machine and dishwasher took forever and weren't able to do a good job of cleaning. And the jackhammer still happened on the second half of the fill of the toilet tank unless I also ran one of the taps halfway in that bathroom at the same time. Run the tap all the way and the toilet quit filling. Run the tap less than halfway and the jackhammer commenced.

So back to the toilet we go.

After watching 43 other videos on Youtube, I learned how to clean out the fill valve. Apparently if you have hard water, even just a wee bit of sediment can block the valve and cause the whole resonance thing. So I did that, and also opened up this clip on the bowl fill because apparently that also can cause a block and back flow.

But what it also made me think about is how families sometimes do this. Not about toilets...about one family member, whether it's a child, an adult child, a parent, or grandparent. In order to try and stop someone's chaos and noise, every other person tries to work around them, and every other person ends up not able to function or be themselves. Everyone's attention becomes focused on the dramatic one and what new chaos they've created today.

Now in the case of a child who is born with a disability or disease and needs constant care, of course the entire family should bond together and help each other out with the care of the child. In those cases and many others, it's about being there, compassion, sacrifice for love and family, and true, unconditional love and bonding.

But in the cases of an adult child who seems to cause drama just to stay as the focus of attention, or even a grandparent who does so in order to subconsciously not be forgotten about...the family really needs to be aware of when the washer, dishwasher, shower, sinks, are all trying to adapt and be less just to appease the "toilet" and keep it from making a lot of noise.

Because as long as the source of the problems isn't corrected, there will just be more and more problems. The problems are only symptoms.

And especially if the "toilet" is an adult child who has been calling the shots all his or her life, he or she will have an incredibly difficult time outside of the home behaving that way because the world won't coddle them the same way the family does. Trying to appease them doesn't help anyone, especially not them. It just makes things a little quieter for a short while.

If you really want to help them, help the family, and help everyone they're going to meet in life, address what they are saying, doing, and how they are acting and refuse to allow it to continue. Refuse to leap every time they start up. Set rules, boundaries, and enforce them so that they will realize that they are the one who needs to adapt, the family just won't do it anymore.